A 3D - printed Nose grown on the arm

A woman in France lost her nose during her fight against nasal cancer in the year 2013. She has now been gifted with a new nose which was grown on her forearm using 3D-printed biomaterials. 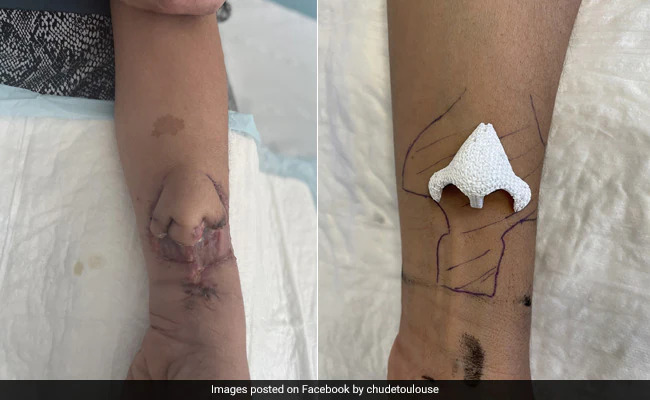 A woman from Toulouse, France lost her nose during the treatment of nasal cavity cancer (squamous cell carcinoma) by radiotherapy and chemotherapy in the year 2013. As a part of the treatment, she lost a large part of her nose and the front part of her palate. 9 years after the incident, experts from Toulouse University Hospital helped her to construct a new nose using biomaterials.

The hospital said that the incident was an “unprecedented intervention” and a “tailored intervention based on cutting-edge technology” The surgery involved growing the nose on the patient’s forearm and then using it. The operation involved ENT experts and plastic surgeons from Toulouse University Hospital and the Claudius Regaud Institute.

For many years the patient lived without a nose and failed nasal reconstruction by grafting skin flaps. Thus, she was offered a two-stage surgical procedure of reconstruction of her nose using biomaterial by Professor Agnes Dupret-Bories and Dr Benjamin Vairel. The biomaterial used for this process can be used for medical purposes to replace a part or function of an organ or tissue.

This kind of construction has never been performed earlier on such a fragile and poorly vascularised area. This technique also made it possible to overcome certain limitations presented by other techniques. The hospital team first implanted the biomaterial into the patient’s forearm and after two months harvested and transplanted it into the patient’s nasal cavity. The experts said they successfully re-vascularised the patient’s nasal cavity connecting the blood vessels by performing microsurgery. The patient is doing well at present.

This kind of innovation is rarely seen in medical history, with new-age technology, science has proceeded much ahead in producing unbelievable results and surprising us every day. If you are interested in joining such a field, you can know about current courses in the Health sector that help you explore areas of Healthcare Engineering, you can find these courses on Docthub Courses. If you wish to explore the available jobs in Healthcare engineering and R&D, you will find available job openings.